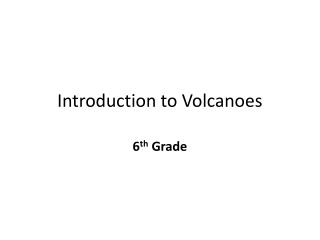 Introduction to Volcanoes. 6 th Grade. Define Volcano using your own words. . A weak spot in the Earth’s crust where molten material comes to the surface. 3 Types of Volcanoes. Active Volcano –one that is erupting or has shown signs that it may erupt in the near future

Introduction - . extensible markup language (xml) uses tags to describe the structure of a document simplifies the