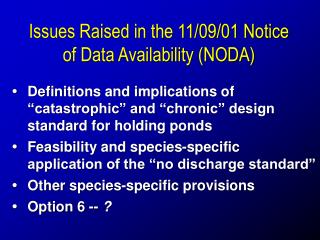 Issues Raised in the 11/09/01 Notice of Data Availability (NODA). Definitions and implications of “catastrophic” and “chronic” design standard for holding ponds Feasibility and species-specific application of the “no discharge standard” Other species-specific provisions Option 6 -- ?.

Key Information Set (KIS) - . aims. give an overview of the kis data requirements and common issues explain the

XML in RDBMSs - . why bother?. most (structured) data stored in rdbms seamless integration of xml and rel. data exploit

2008 AP Practice Exam - . have a copy of the test for each student. proceed to each question only after students try to

Issues for Directors, Officers and their Attorneys - . by: kitt turner. i. selection of appropriate d &amp; o

Some issues and applications in cognitive diagnosis and educational data mining - . brian w. junker department of

Determinants of PES - . availability of raw materials: for example, availability may cap the amount of gold that can be

NOTICE: - . the following presentation contains copyright protected materials used under the fair use exemption of the

NIH Notice of Award - . received by university of california / lbnl nih notice of award (noa) is standardized and is