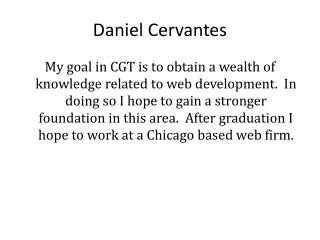 Daniel Cervantes. My goal in CGT is to obtain a wealth of knowledge related to web development. In doing so I hope to gain a stronger foundation in this area. After graduation I hope to work at a Chicago based web firm. Minchao Jin . The Cross and the Prophecies of Daniel and Revelation - . fred bischoff www.scripturefirst.net. introduction. before we

Daniel Cervantes - . my goal in cgt is to obtain a wealth of knowledge related to web development. in doing so i hope to

JXTA Innovation - . an introduction by daniel brookshier. why are you here?. jxta, what’s that? jxta sounds cool. jxta

DANIEL - . the light that daniel received direct from god was given especially for these last days. (lde, 15). the 2300

Daniel 1 - . daniel dared to be godly. what does it mean to be godly?. to be godly is to fear and respect god so much

Daniel 1 and 10 - . …daniel purposed in his heart that he would not defile himself with the portion of the king’s

Daniel 6:1-5 - . daniel’s position of authority was to protect the king from what?. daniel became distinguished above