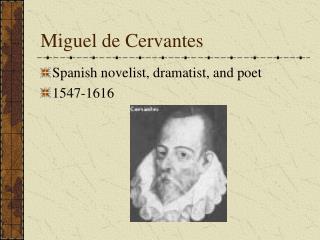 Miguel de Cervantes. Spanish novelist, dramatist, and poet 1547-1616. Don Quixote. Term “quixotic”—a person who is quixotic is in the grip of misguided idealism. Conflict between idealism and realism. Illusion vs. Reality. Don Quixote as Parody. Miguel Cervantes - . by: takayla alestin. who was he?. miguel de cervantes

Miguel de Cervantes Saavedra - . -born in 1547. -he was a soldier, a poet and a novelist. -the most important writer