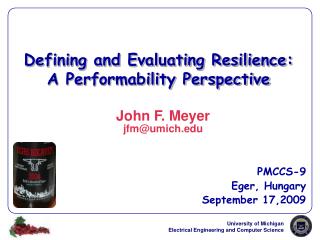 Metrics and Techniques for Evaluating the Performability of Internet Services - . pete broadwell pbwell@cs.berkeley.edu.

Organisational resilience: Can it be learned? - . prof. jim arrowsmith. resilience is the capacity to respond well to a

RESILIENCE - . lesson 8 for february 19, 2011. what is resilience ?. this week we studied the story of some biblical

Resilience - . april 2014 s a m remington. objectives for session. why is resilience important now what it is and means