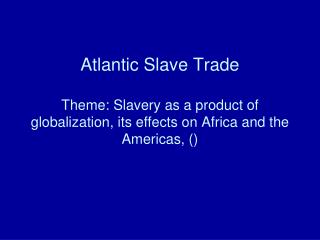 Atlantic Slave Trade Theme: Slavery as a product of globalization, its effects on Africa and the Americas, (). History of African Slavery. Slavery has existed since antiquity It became common in Africa after the Bantu migrations spread agriculture to all parts of the continent.