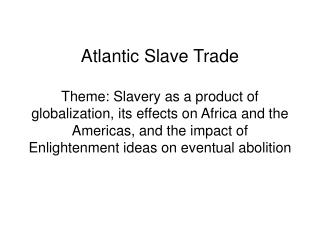 Atlantic Slave Trade Theme: Slavery as a product of globalization, its effects on Africa and the Americas, and the impact of Enlightenment ideas on eventual abolition. History of African Slavery. Slavery has existed since antiquity