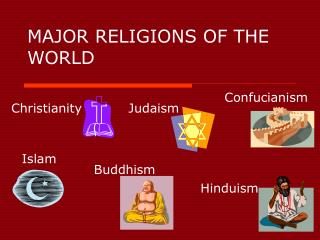 MAJOR RELIGIONS OF THE WORLD

MAJOR RELIGIONS OF THE WORLD. Confucianism. Judaism. Christianity. Islam. Buddhism. Hinduism. Religion’s Founders. Jesus of Nazareth – Jewish teacher Taught love for Jewish God; that there is only one true God; that people should love others as they do themselves

MAJOR RELIGIONS OF THE WORLD

Where did the world’s major religions originate, and how do religions diffuse? - . by elsie gomez. diffusion. over time

7 MAJOR WORLD RELIGIONS - . what defines a religion ?. a religion consists of supernatural power or powers that are

The Five Major Religions - . restrictions on religion by the governments of world countries. christianity judaism islam

World’s Major Religions Buddhism - . this presentation was made by kozyreva victoria form

Ancient World Religions - . mr. wilson wren high school. the vedic religion. map of the beginnings. the religion of the

Major World Religions - . sol whii.15. warm-up: how have the five world religions had a profound impact on culture and

Where did the Major Religions of the World Originate, and How do Religions Diffuse? - Key question 2:. where did the

The 5 Major World Religions - . where are the religions?. types of religions. monotheistic – religion with one god