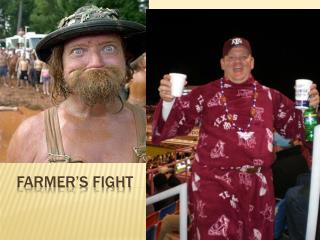 Farmers and Populism - . chapter 9, section 3. plight of the farmer. farmers received low prices for their crops but had

CHAPTER 26: THE GREAT WEST &amp; THE AGRICULTURAL REVOLUTION - . cultures on the plains. still untamed after civil

Vocational Education Since 1900 - . the need. the public was disenchanted with the school system in the early 1900s.

Which two Native American nations lived as farmers and hunters? - A. arapaho and apache c. sioux and comanche b. omaha

Bellringer - . a goal of the granger and populist movements was to expand rights for african americans help western

Farmers and the Populist - . problems: u.s. issues “greenbacks” during civil war worth less than coins or

American History SOL Review - . moving west: post civil war. in the period from 1860 to 1890, which experience was shared

Tomato Battle 2017 - More than 20,000 revelers throw 160 tons of over-ripe tomatoes at each other in spain during the