The Fight for a Continent - PowerPoint PPT Presentation 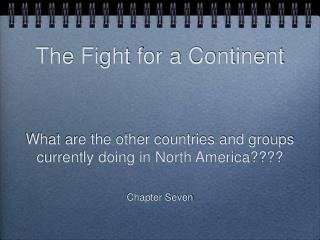 The Fight for a Continent

The Fight for a Continent. What are the other countries and groups currently doing in North America????. Chapter Seven . The Spanish Move North . Pages 232 - 236. Fighting for Florida. The Spanish had a strong hold on most of South America and Mexico.

The Fight for a Continent

Ch 19, Sec. 2 America Joins the Fight! - . examine the reasons why the united states helped the allies to win the first

The Millennium Development Goals The fight against global poverty and inequality - . eradicate extreme hunger and

The Fight for the SERIAL COMMA - . or, how commas can save lives, reputations, and keep families intact during the zombie

Chapter 3 The Commercial North - . section 3(a) notes. commerce grows. under mercantilism, the colonies existed to help

Diplomacy in Latin America and the Spanish-American War - . the monroe doctrine , europe and the western hemisphere. *

Why try to be continent? - . social rules maintained by embarrassment (edelmenn 1981) stigma: “individual who is

FIGHT CLUB - . a marxist analysis. quick reminder. marxism is a movement that grew up around the philosophy of karl marx

The Fight to Succeed Lenin – Cookie Power! - . in this activity, the cookies represent power. the class must move the