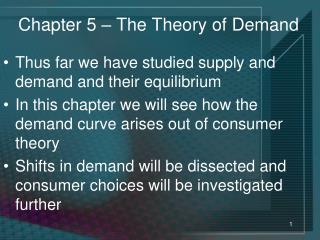 Chapter 5 – The Theory of Demand Chapter 5 – The Theory of Demand. Thus far we have studied supply and demand and their equilibrium In this chapter we will see how the demand curve arises out of consumer theory Shifts in demand will be dissected and consumer choices will be investigated further.

Chapter 5 – The Theory of Demand

Chapter 10 - . 10.1 the chromosome theory of heredity. chromosomes are located in the nucleus factors (genes) are found