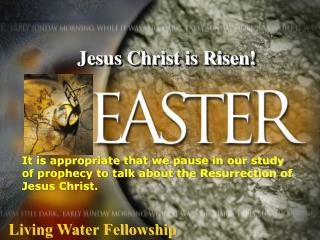 Jesus Christ is Risen!. It is appropriate that we pause in our study of prophecy to talk about the Resurrection of Jesus Christ. Living Water Fellowship. The Crucified &amp; Risen Christ - . a lenten journey. the passion according to mark. session 1 of lenten series.

Looking for Jesus - . &quot;do not be afraid, for i know that you are looking for jesus, who was crucified. he is not

Worship Christ the Risen King - . rise o church and lift your voices christ has conquered death and hell. sing as all the

Jesus Christ Appears To His Disciples - . st. mary coc sunday april 25 th 2012 . “the disciples were glad when they saw

We Serve a RISEN Savior! - . “…but the angel said, ‘don't be alarmed. you are looking for jesus of nazareth, who

Christ in the Books of the Bible - . a brief overview of the bible dr. gary c. woods. the bible portrays jesus christ as

Who is Jesus? The Person of Christ - . i. modern struggles with the person of jesus. the jesus seminar. albert

Fling wide, you heavenly gates! Prepare the way of the risen Lord - Did you feel the mountains tremble? did you hear the