What is a Parent? - PowerPoint PPT Presentation 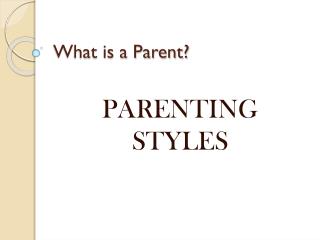 What is a Parent? What is a Parent?. PARENTING STYLES. Types of Parenting Styles and Outcomes.

What is a Parent?

The Effect of Parenting at a Young Age and the Parenting Style of the Parent - . keyrsten knight salt lake community

Parental Alienation - . syndrome or symptom by reginald hirsch. introduction. 1. “ i know it when i see it.” 2. what

Parent View - . ofsted survey. what is parent view. parent view is a website setup by ofsted to get parents opinions

A Fleming Parent’s Guide to Child Safety on the Internet - . adapted by kam purewal june 24,2010 based on: responding

Title I: A Parent and School Partnership - . parent meeting objectives. understand the legal aspects of the “targeted

A Parent’s Responsibility to their Children - . psalm

Parenting - . styles and stats. parent. one who gives birth to a child one who nurtures and cares for a child a guardian

The Value of a Parent - . as parents, we guide by our unspoken example.  it is only when we're talking to them that our

What is Parenting? - . parenting. parenting: is providing care, support, and guidance that can lead to a child’s