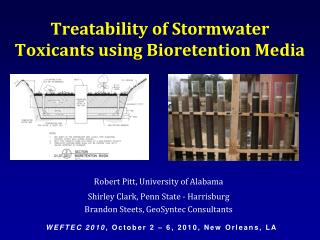 ABSORPTION OF TOXICANTS - . process by which toxicants cross the epithelial cell

Types of Toxicants - . classification based on particular effects on health. carcinogens. chemicals or types of radiation

Making Bioretention Work - . sustainability for all the places between the buildings. green girl land development

Stormwater - . stormwater. industry a potential source of pollution most remediation is simple structuring training is