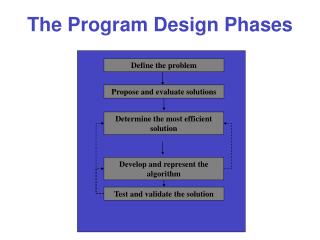 Define the problem. Propose and evaluate solutions. Determine the most efficient solution. Develop and represent the algorithm. Test and validate the solution. The Program Design Phases. Programs are Solutions to Problems. Programmers can represent their solutions in several ways :

The Program Life Cycle. - The program life cycle. 1. phases of the life cycle. 2. example of the design phase. 3.

Program Design - . introduction. the process of design involves “conceiving and planning out in the mind” and making

Steps in the Program Development Process - . 1. analyze the problem 2. design a solution 3. code the solution

Software Design - . deriving a solution which satisfies software requirements. objectives. to introduce the process of

The Software Development Life Cycle - . today we will:. go over the different phases of the software development life