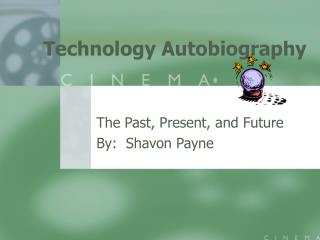 Technology Autobiography. The Past, Present, and Future By: Shavon Payne. In The Beginning….

Ben Franklin’s Autobiography - Journal: please comment on how the autobiography demonstrates the various

College Technology Getting Us to the Future - . craig klimczak vice chancellor of technology and educational support

Technology - . tools for change. module objectives. describe change including technology and how it affects the

Using Technology in Science Teaching - . how technology can help with analysis and synthesis of data. dr. colleen sexton

Martin Heidegger - . the question concerning technology with thanks to professor b. babich, fordham university.

The Technology Department - What is technology and what do technology students do? by dr. cliff mirman chair, technology