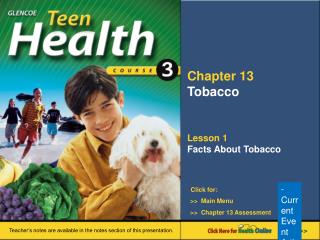 Chapter 13 - . the musical. on musicals . american musical theatre is our indigenous art form. we can’t claim

Chapter 13 - . smart pricing. 13.1 introduction. implicit assumption so far has been that demand cannot be influenced in

CHAPTER 20 TOBACCO - . lesson 1: the health risks of tobacco use. what are some harmful effects of smoking tobacco

Chapter 13 - . colleges and universities. thoughts to ponder: chapter 13. when we make college more affordable, we make