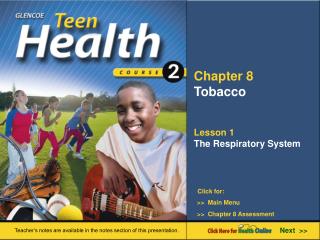 Chapter 8 Tobacco. Lesson 1 The Respiratory System. Click for:. >> Main Menu. >> Chapter 8 Assessment. Next >>. Teacher’s notes are available in the notes section of this presentation. DO NOW: Define STDs. 2. Choose a STD and write down few symptoms about it. Essential Question:

Tobacco Industry Myths and Facts - . prof dr elif dağlı. conflict of interest. none. myths of the industry. tobacco has

Global Tobacco: Will Legislation Kill the Industry? - . july 2009. introduction legislation: what restrictions are there?

TOBACCO FREE FOR RECOVERY - . assisting mental health consumers with tobacco cessation. training program. what is the

Hookah Smoking: The Past and Future of Tobacco? - Brian primack, md, edm, ms assistant professor of medicine and

Monograph 19 The Role of the Media in Promoting and Reducing Tobacco Use - Editors ronald m. davis, m.d., senior

Tobacco Free Sports - . a guide for coaches. know the facts!. each day in the us more than 3,200 people younger than 18