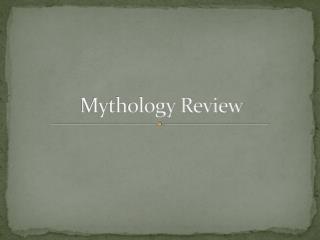 Mythology Review. Olympians and Titans. Apollo God of Light, Archery, Art, and Music Favorite of the Greeks and Romans Son of Zeus and Leta Athena Goddess of Wisdom and Knowledge, sprung fully grown from Zeus’ head in full armor Her Roman name was Minerva. Artemis

Mythology Review - . coming of the gods creation of man trouble comes to earth along came a spider why the seasons change

Greek and Roman Mythology - . a review of the principal gods and goddesses. what is a myth?. a traditional story rooted

Mythology and Allusion - . why are myths still relevant?. what is mythology?. myths are stories that were created to

Review for Mythology Test - . these are the things you need to know!. why do we study mythology?. to understand allusions

What is Mythology? - . an introduction into the world of greek mythology. mythology defined. mythology is “a body of

Mythology - . gods, goddesses and mortals. the “greek miracle”. mankind became the center of the universe. greeks

National Mythology Exam General Review - . practice exam #1 (choose the best answer, and go to the next slide to see if

Greek Mythology - . the epic, homer, and the odyssey. review: what is a myth?. myths are traditional stories r ooted in a

Greek and Roman Mythology - . a review of the principal gods and goddesses. since ancient people didn’t have science as

Greek Mythology - . miss griffin 12 grade english- introduction to the iliad and the odyssey get to know the greek gods

Mythology - The 12 olympians. mythology. zeus. roman name: jupiter god of: the sky son of: cronus and rhea husband of:

Mythology Review - . gods. zeus – ruler of the gods; god of the sky; son of kronos and rhea; father of hercules and

Mythology - . by steven and cody . chaos . creates universe a void of nothingness gave birth to the gods who formed the

Greek mythology and the odyssey - . mythology. myths are stories created to help a culture explain the world they live in