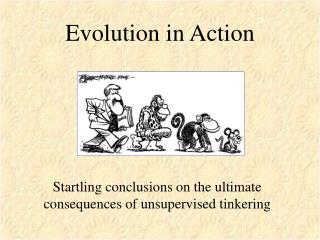 Evolution in Action. Startling conclusions on the ultimate consequences of unsupervised tinkering. The Evolutionary Algorithm. Start with something that works pretty well. Make tweaked copies of it. Various copies compete against each other, and environment. ‘Fittest’ reproduce most.