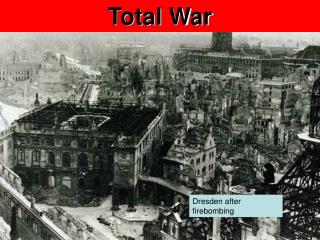 Total War - . concepts. concept introduced by arthur marwick. theory to contrast the war with the limited wars of the

Total War - . ne. to what extent was ww2 a total war?. 70 nations took part in the war battles took place in the

Total War - . war affects the home front. the entire force of government is dedicated to winning the war. activity: take

TOTAL WAR - . what is total war?. total war is the act of using all of society’s resources to win war convert industry

Total War - . what is total war?. make any sacrifice in order to achieve victory direct all resources and economy towards

Total War: WWII - . warm-up:. why do you think time magazine said, “the political history of the 20 th century can be

Canada’s Total War - . world war ii. this war involved most countries in the world as full, participatory combatants in

Total War: A War of Machines

Sherman and Total War - . in the movie glory , the union army attacks a small town in georgia on a “foraging