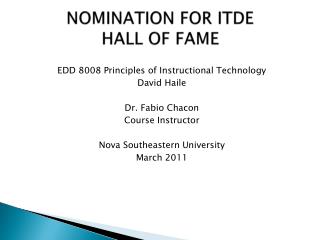 NOMINATION FOR ITDE HALL OF FAME NOMINATION FOR ITDE HALL OF FAME

The final Super Tuesday - California and five other states vote in primaries, as hillary clinton wraps up the democratic

The Making of the President - . a.k.a , the steps to electing the president. the basic steps are…. self-nomination

L ecture 25: Input /Output Technology - . hw2 due sunday gr5 (final implementation) out today is the last nanoquiz of the

Age of Exploration - . western civilization. agenda. joke of the day. why would europeans want to explore the globe!?!.

TOWN HALL - . presented by the office of public school construction &amp; the division of the state architect.