What is a manifesto? - PowerPoint PPT Presentation 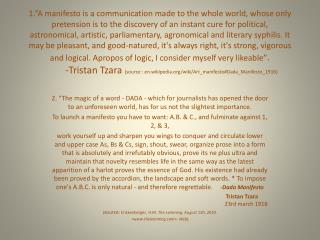 What is a manifesto? What is a manifesto?

Jesus Christ`s Manifesto - . as set out in his parables and parabolic illustrations. spiritos accumilatos. manifesto

Pressures in UK Healthcare: Challenges for the NHS - . carl emmerson chris frayne alissa goodman. “we will rebuild the

Economics and the Industrial Revolution - Adam smith. he made the book a wealth of nations. he believed is

The Sandbox Manifesto - The rules of the sandbox are not just for kids. see how playing nice and playing well can serve

Metadata Manifesto: Integration, Reconciliation and Change of Enterprise Metadata - &quot;the effectiveness of a