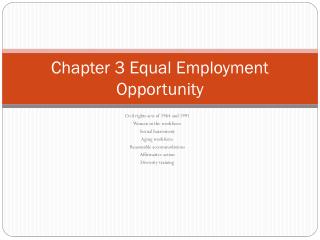 Equal Employment Opportunity Commission - . enforce laws against discrimination in the workplace. 2,100+ employees at 53

Title VII of the Civil Rights Act of 1964 - . equal employment opportunity. “as a consequence, self-discipline has

Chapter 33 Equal Opportunity in Employment - . equal opportunity in employment. the right of all employees and job

Performance Appraisals: Yes They Do Matter* - . presented by michael s. cohen, esq. *this outline should not be construed