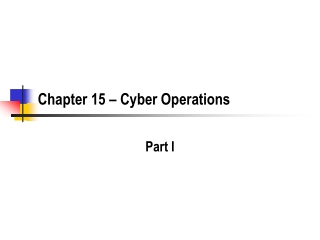 Chapter 15 – Cyber Operations. Part I. Cyber. “A failure by the Department to secure its systems in cyberspace would pose a fundamental risk to our ability to accomplish defense missions today and in the future.” - 2010 Quadrennial Defense Review