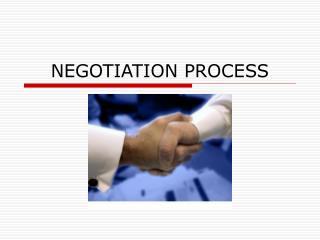 NEGOTIATION PROCESS. What is negotiation?. Characterized by two or more interdependent parties who have a conflict of interest,and who choose to adress that conflict by striving to reach an agreement through a process of mutual adjustment of each party’s demand and concessions. NEGOTIATION PROCESS - . negotiation and communication. communication has no determinate beginning or end human

BIA Negotiation Process - . compacting. send letter of intent to bia for either planning or negotiating. decide which

The Negotiation Process - . phases of a negotiation. preparation. identify the context assess the nature &amp;

The Process of Negotiation - . negotiation is not a transaction. if you want to negotiate, you must necessarily go

NEGOTIATION TERMINOLOGY NEGOTIATION - . a process where two or more parties work to reach a joint agreement on issues of

Negotiation - . tips #13. background. negotiation is a process in which two or more parties exchange goods or services

Negotiation - What is negotiation?. negotiation: win-win situationsgive- and take processcontext around the