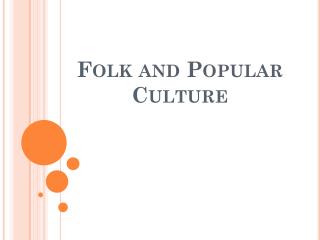 Chapter 4 “Folk and Popular Culture” - . “culture is the agent, the natural area is the medium, the cultural

Folk and Popular Culture - . ap human geography. we have already discussed culture…. includes all features of a way of

English Folk Music - . ideas and conception. folk music . folk music recounts or reveals the history of a culture in a

Folk and Popular Culture - Features of culture . 1. styles of dress2. ways of greeting people3. beliefs about