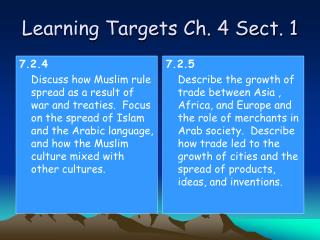 Learning Targets Ch. 4 Sect. 1. 7.2.4 Discuss how Muslim rule spread as a result of war and treaties. Focus on the spread of Islam and the Arabic language, and how the Muslim culture mixed with other cultures. 7.2.5 Section Write – Ch. 14, Sect. 1 - . explain in two to three sentences which statement(s) below you agree with most and

Ch.1 Sect.1: Peopling the Americas - . what you will learn in this section!. how people hunted and gathered what a

Chapter 1 : Learning Targets - . distinguish between chemical and physical changes and properties know the states of

Ch.4 Sect.3:Struggling Toward Saratoga - . what you will learn in this section. valley forge battle of trenton

CIA 4-1 Learning Targets and Review Questions - . we are learning to explain that diversity of species is developed

Ch. 2 Sect. 2 - . measurement and uncertainties. precision and accuracy. precision describes degree of exactness of a