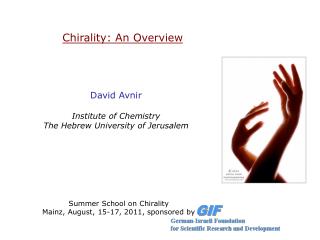 Chirality - . stereoisomers : isomers with the same connectivity between atoms but have a different arrangement of atoms.

A Method of Resolving the 180-Degree Ambiguity by Employing the Chirality of Solar Features - . s. f. martin, y. lin, o.

Chirality - . chirality - the handedness of molecules. isomers. we concentrate on enantiomers and diastereomers.

Chapter 5- Chirality - . chirality. a chiral object is an object that possesses the property of handedness a chiral

Lecture 12 APPLICATIONS OF GROUP THEORY 1) Chirality - . a species is called chiral if its mirror image (enantiomer) is

7.4 Properties of Chiral Molecules: Optical Activity - . optical activity. a substance is optically active if it rotates