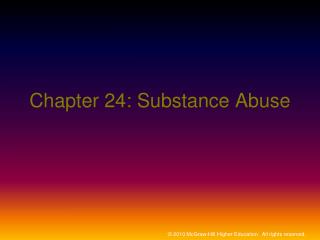 Chapter 24: Substance Abuse. Substance abuse has no place in athletics There is an increasing number of athletes engaging in substance abuse Use and abuse of substances can have a profound effect on performance Both positive and negative

Chapter 12 - . identifying the substance of genes. chapter mystery. page 337 uv light why is uv light so dangerous? how

Drug Abuse Treatment: The Blending of Research and Practice A Community Treatment Provider Perspective - . presented by:

Substance Abuse Curriculum - A person diagnosed with alcoholism is therefore addicted to alcohol. ... treating the