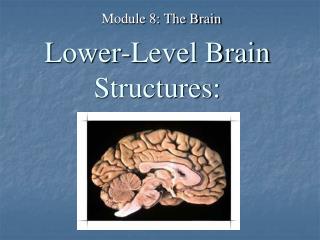 Lower-Level Brain Structures: . Module 8: The Brain. Brainstem. The oldest part of the brain Is responsible for automatic survival functions Located where the spinal cord swells and the brain just begins. Medulla. The base of the brainstem The Structures of the Brain - . mod 4 part 1 . the tools of discovery . how do neuroscientists explore the connection

The Brain Structures and Functions - . objectives. to learn features and functions of cns to understand the brain

Older Brain Structures - . the brainstem is the oldest part of the brain, beginning where the spinal cord swells and

Sockets: lower-level view via Oracle - . oracle here is the oracle of bacon, hosted at uva uses imdb to develop database