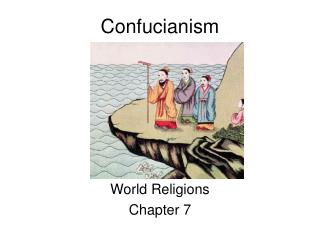 Confucianism. World Religions Chapter 7. Kung Fu-tzu. (Master Kung – 551 – 479 BC). Is better known as Confucius. From an early attempt to render his name in Latin. He is one of the most influential people who ever lived. Having a vast influence on ¼ of all the world’s population. MAJOR COMPARISONS/ANALYSES - . by: deneshia w. and kayla e. compare hinduism and confucianism. hinduism. was a minor

Daoism, Legalism &amp; Confucianism - . three philosophies that look at how to get people to behave and how the

Daoism, Legalism &amp; Confucianism - . three philosophies that look at how to get people to behave and how the

Objective: Compare and contrast Daoism and Confucianism - . essential question: how do ethical systems impact the world?.

Early Religions: Confucianism - . a religion/philosophy , established by a chinese philosopher, confucius. by: se-young,

What is Confucianism? - . confucianism. based on the teachings of confucius, a chinese philosopher. born in 551 b.c. died

Chapter 6 Section 1 p.3 - . what is unique about hinduism and it’s classification by geographers? what makes hinduism

Confucius and Community - . 孔子與 社區. how did confucianism create a harmonious society?