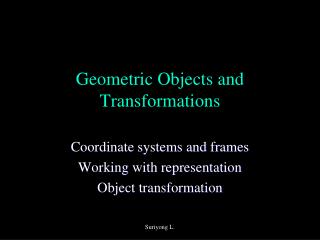 Geometric Objects and Transformations - . chapter 4. introduction: we are now ready to concentrate on three-dimensional

Nitrogen Transformations - . this is the 4 th module of a training course titled: submerged soils for rice production an

Geometric Dimensioning and Tolerancing - . form tolerances. location tolerance . a. gdt problems . are all of these auto

Arc Objects - . arc objects is the development platform for the arcgis family of applications such as arc map, arc