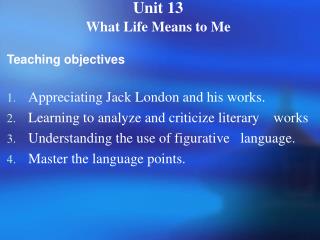 What Patriotism Means to Me - . your essay will be judged on how well you understand, develop, and present the theme. a

What australia means to me - . green. &amp;. gold. green and gold is represented on the coat of arms by the wattle

What Christmas means to Me - Writing santa christmas letters. drinking hot chocolate in front of a ... cookies and milk.

What The Rotary Foundation means to me - . the rotary foundation gives me a chance to help and to sow seeds of

What Being a Teacher Means to Me - . radie kineman cep 452 fall 2010. special education. i chose this particular field

Unit 13 City life - . warm-up. 1. what are the advantages and disadvantages of city life?. advantages first,people enjoy

What the Pledge of Allegiance Means to Me - . the pledge of allegiance to the united states flag is an oath of loyalty to

What Diversity Means to Me by Rhonda Bend Bush - . introduction. definition of diversity and multicultural education.

Show Me What Globalization Means for Credentialing Programs - . presented at the 2004 clear annual conference september

Bring Me to Life - . by evanscene theme: life without you is an empty void. produced by: ana verdia. how can you see

what BRICS means to you? - . can these two triangles make the world more balance?. which country/region will become the