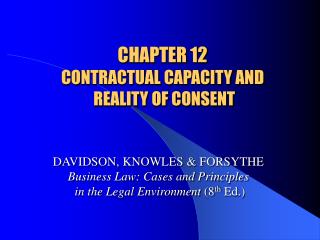 Contractual Capacity - . chapter 7 pages 144-157. points to ponder. have you ever entered a contract and then

Contractual Capacity - . chapter 7. the requirement of

Capacity and Consent - Click your mouse anywhere on the screen to advance the text in each slide. after the starburst

Contractual Capacity of Individuals and Organizations - . bartek , thompson, bond, meanix. what is capacity, you ask?.

Contract Law—Reality of Consent - . several related concepts causing contracts to be “voidable” each provides a

Chapter 12 Capacity and Legality - . learning objectives. does a minor have the capacity to enter into an enforceable