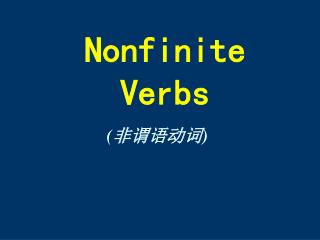 Tips on Gerunds and Infinitives

Using Reflexive Verbs with different tenses - . reflexive verbs in the present tense. my sister brushes her hair with a

Verbs - . verbs. verbs are a necessary component of all sentences. verbs have two important functions: some verbs put

Stem Changing Verbs - . verbs…. a verb is an action. a verb that has not been changed is called – an infinitive verb.

-AR Verbs - . infinitive. an infinitive is the most basic form of a verb that has not been conjugated. it always has “

CHAPTER # 4 - . gerunds and infinitives. verb. non finite verb. finite verb: a verb which is used according to the

Finite and Non-finite Verbs - . finite. non-finite. has no subject, tense or number functions as the infinitive, the