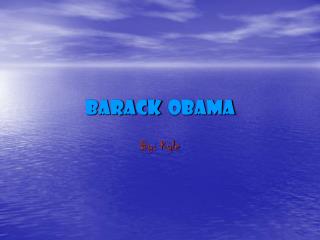 Barack Obama. By: Kyle. L i fetim e. Birth: August 04,1961 Death: Place of birth: Honolulu, Hawaii. Best Known for. Barack Obama is the 44 th and current president of the United States. Inaugurated on January 27,2010 he is the first African American to be U.S president.