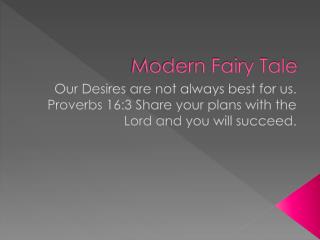 Modern Fairy Tale. Our Desires are not always best for us. Proverbs 16:3 Share your plans with the Lord and you will succeed. . “The Third Wish” By Joan Aiken. End Product: Write a modern version of your favorite fairy tale. Path to Final Product.

Fairy Tale Frolics - . 5 themes of geography. getting started. review the fairy tales as a group note any of the 5 themes

Modern science and fairy tales - . by daniel schafer. what’s the point?. “ mythbusters ” . the psychology of fairy

Twisted Fairy Tales - . creative writing unit. what is your favorite fairy tale that you remember from childhood

Author: Jackie Mims Hopkins Genre: Modern Fairy Tale - . big question: what is unique about the landscape of the

Fairy Tales - . and how to them. fracture. who said it?. “if you want your children to be intelligent, read them fairy

What Are Fairy Tales Really Saying? - We use fairy tales to teach young children morals; however, these fairy tales

Author : Jackie Mims Hopkins Genre: Modern Fairy Tale - . big question: what is unique about the landscape of the

Modern Cinderella - . what do you know about cinderella?. stepmother??? stepsister??? animal friends??? fairy