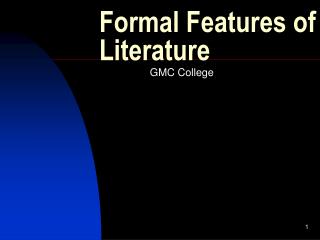 Features of the Literature Review - . purpose: to convey a lot of knowledge from the authors/experts in an easily

Semantic and formal features in language change - . elly van gelderen dgfs, march 2012. outline. 1 what are the

An introduction to the features of Chinese classical literature - . huang, paoshan. the history of an idea of literature.

THE VICTORIAN AGE IN LITERATURE: MAIN FEATURES - . use of the omniscient 3 rd person narrator the narrator is intrusive

Types of Formal Reports - . chapter 14. definition. report is the term used for a group of documents that inform, analyze

Formal Properties of Language - . grammar. morphology syntax semantics. morphology. is concerned with how phonemes are

Formal Elements of Games - . maribeth gandy and jeff wilson based of ch 3 of game design workshop by tracy fullerton.