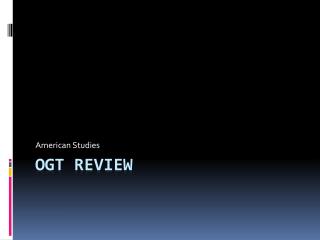 Social Studies Review: - . map unit. what is a map?. a map is a drawing that shows where places are. what is included on

Limit and Derivative Review - . for many functions. ...and many values of a , it is true that and it is usually apparent

MONOTHEISTIC AND POLYTHEISTIC REVIEW QUESTIONS - . explain the trail, death, and resurrection of jesus? charged with

OGT Review: Intro to Student Driven Learning - . 1/30/12. what gas does the process of photosynthesis release into the

OGT Review Chapter 3: Enlightenment , Industrialization and Imperialism - . with your team, a nswer questions 1 , 2 , 4 ,