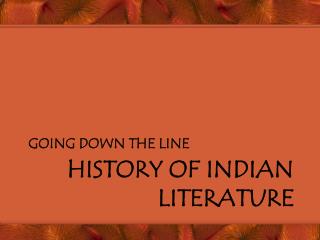 GOING DOWN THE LINE. HISTORY OF INDIAN LITERATURE. Indian Literature. One of the world’s oldest and richest Oral traditions – storytellers present traditional Indian text Literature is influenced by:

Introduction to Anglo-Norman History &amp; Literature - . the norman invasion the “invasion’s” linguistic and

History of Children’s Literature - . children’s literature is a relatively new kind of literature. before 1850, books

History and Trends in Children’s Literature - . how can we know how we got here- if we don’t know where we’ve been?

Literature and History (2): the Use of History in Literary Criticism - . literary history, new criticism and new

Interpreting Maps in Modern Indian History - . india’s encounter with colonial modernity. the idea of map. map as a