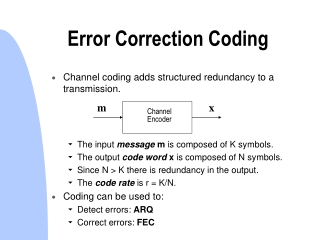 Error Correction Coding. Channel coding adds structured redundancy to a transmission. The input message m is composed of K symbols. The output code word x is composed of N symbols. Since N > K there is redundancy in the output. The code rate is r = K/N. Coding can be used to: The Layers of a Network and Error Correction - . wade trappe. lecture overview. layers components the 7 layers of osi

Why Error Detection &amp; Correction - . because of attenuation, distortion, noise and interferences, errors during