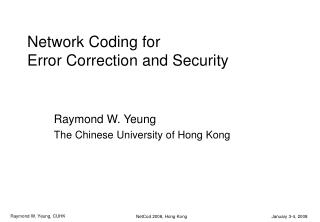 On error and erasure correction coding for networks and deadlines - Tracey ho caltech ntu, november 2011. on error and

Error Correction - . consider a scenario where retranmissions are not practical and error rate is high example:

FEEDBACK AND ERROR CORRECTION - . definitions. errors and mistakes: an error is a reflection of the learners knowledge of

Error detection and correction - . how can the receiver determine if there was an error in the message the sender sent?