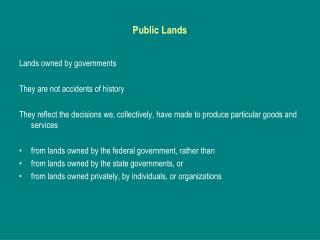 US Public Lands - . developed by congress to divide the louisiana purchase concepts land laid out in regular, square

Public and Federal Lands - . i. regulation of federal lands. no nation has set aside as much of its land for public use,

Our Public and Federal Lands - . the big picture. 35% of us is public land 75% of that land is in alaska. logging,

Public Lands in the Crosshairs - . land, water, woods, wildlife. school trust lands is it “cash for kids” or “cash