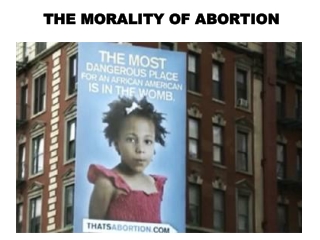 THE MORALITY OF ABORTION. Abortion or Not?. In the US, there is one abortion for every three live births. Over a million abortions performed every year. One third of the women who have abortion are married; the rest are single. Yet, many women are torn between conflicting moral views: The Morality of Abortion - . outline. introduction: what this chapter is about. the person argument. the question of

ABORTION: Who decides your morality? - . gennifer george liberal arts capstone. what is an abortion?. defined by

The Morality of the Right to Abortion…And the Immorality of Those Who Oppose It - . history of roe vs

The Morality of Euthanasia - . active euthanasia —performing an action that directly causes someone to die (“mercy

The Emergence of Morality

The Nature of Morality - . general overview “we are discussing no small matter, but how we ought to live” (plato in

The Principles of Morality - . unit ii. what is freedom?. the power, rooted in reason and will, to act or not to act .

The Development of Morality - . anna floyd 2004. presentation overview. theory definition a history of perspectives on

THE NATURE OF MORALITY - . is passing a personality or honesty test a justifiable pre-employment condition? how about

The Norms of Morality - . chapter 6. norms. - is a standard of measurement. -instrument of which the quality or

The morality of human acts

THE ABORTION - . katie yohe and katie byrne. ¨the term abortion¨. is translated to an induced abortion of a human

Philosophies of Morality - . spiritual growth project quote. “a person who governs his or her passions is master of his

The Evolutionary Basis of Morality - . marc j. roberts november 3, 2008. a preliminary warning: “is does not imply

Morality of Hunting - . by: brittany clarke. background on hunting debate. for many years anti-hunting groups have been

The Morality of the Ten Commandments - . what can the ten commandments teach us about living a moral life?. the ten

Morality - Morals/ethics. pertaining to the consensus of manners and customs within a social group, or to an inclination