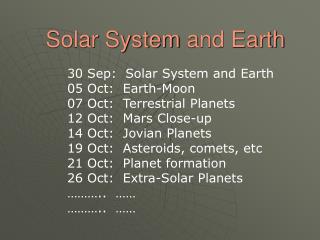 Earth and The Solar System - . earth science 2013 pulford. the universe. astronomers define the universe as all of space

1. Earth and the Solar System - . know the names of all the planets and their order from the sun know what the nearest

The Earth in The solar System - . have you seen the night sky ? how does it look &amp; what all objects do you see?

AGE OF THE EARTH &amp; SOLAR SYSTEM - . so far scientists have not found a way to determine the exact age of the

Earth has formed in our solar system - . we need to understand planetary formation constraints: astronomical observations

How and when did the Earth and Solar System Form? - . bb. a. supernova and formation of primordial dust cloud. nebular

Solar Neutrinos and Earth Structures - . by miriam aczel. what are neutrinos?. they are almost massless —hardly feel

Solar Earth Choice - We strive to make renewable energy available to any household. for the future of our children and