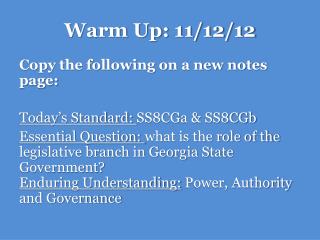 Monday , Nov. 28 - . turn in your thanksgiving worksheet if you did not on tuesday update your table of contents date

Monday 10/14/13 - . goal: to discuss and describe life of the plains indians. warm up: work with partners on your

HOSA - . 2011-12. what does hosa stand for?. health occupations students of america. what is hosa?. hosa is: national

Water Cycle WebQuest - . your trek through the water cycle and all of it's phases. water cycle

Preamble 前言 - . i am not a tai chi master, not even a tai chi teacher, in spite that i am holding a certificate to