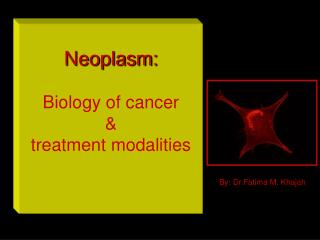 Cancer Treatment - . get a 2 nd opinion do your homework! (research viable treatments, side effects, benefits and risks)

THE BIOLOGY OF CANCER - . a group of diseases identified by uncontrolled cell growth and proliferation. normal cell

Cancer Treatment Modalities - . objectives. the learner will be able to: discuss the various treatment modalities

Cancer biology - . 3-5-2014. instead of external signalling. 1- they may produce growth factor ligands themselves, to