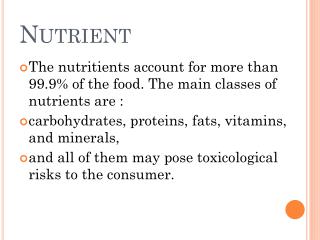 Nutrient. The nutritients account for more than 99.9% of the food. The main classes of nutrients are : carbohydrates, proteins, fats, vitamins, and minerals, and all of them may pose toxicological risks to the consumer. NUTRIENT - Healthy. food. what do you think it is?. energy. be active. nutrient. grow. proper body

nutrient network - 1. corner posts. this assumes that all four corners are marked and square . 1a. pounding fence posts.

NUTRIENT CYCLES - . the earth as a self contained system (powered by solar and geothermal energy). © 2007 paul billiet

Nutrient Absorption - . how many different systems do you see? digestive -breaks down and absorbs nutrients 2.

Nutrient Cycles - . carbon, nitrogen and phosphorus cycles. nutrients. nutrients are chemicals that are required for

NUTRIENT INTERACTION - . nutrient a chemical compound (such as protein, fat, carbohydrate, vitamins, or minerals) that

Nutrient Absorption - . what is r espiration?. cellular respiration - the process by which cells get energy from the

Nutrient Balance - . nres 406/606 spring 2013 hernandez.leo@cabnr.unr.edu. the study of how plants absorb and assimilate

Nutrient changes - Annotation of transduction pathways genes in the genome sequence of the basidomycete laccaria bicolor.