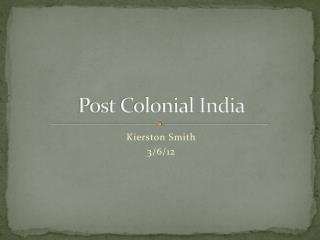 Post Colonial India. Kierston Smith 3/6/12. Independence. August 15 th 1947 Britain no longer rules Separated into India and Pakistan. New Leaders. Jawaharlal Nehru lead India in the time between its freedom from Britain to the time of his death in 1964 as Prime Minister. Post Colonial Deconstruction - . who and what is valued in society? where does this idea come from? how has it affected

Post-colonial History - . as you look at t he following resources, think about the competing demands on the lake st clair

Post-Colonial Africa: Economics - . intro reading. read “farming and tourism economies” on pages 433-444 what is the

India Post - . vision. india post's products and services will be the customer's first choice. mission. 1.to sustain its

Imperialism and Colonial India - . definition. one country’s domination of the political, economic, and social life of